What I love in Firefox 3

There has been much said about Firefox3, good and bad. People have stayed away from the beta and RC builds because the real power of Firefox, the extensions is not there yet. But still I got hooked to it since its Beta 3 release, which I found was more or less stable. So heres my fav feature list

in no particular order. I actually love all of them.

1. The new location of the Home Button.    I think this is something which is one of the most normal thing to be done. But some product manager probably of the first browser wanted it that way or the dev said that if you want it someplace else, then more time is needed. Since then everyone has been putting that home button next to Refresh. Seems stupid now, doesn't it.

2. Most Visited Button. True of late what I do most of the time is that I visit the same pages. Its not all that often that I need to find new stuff or am bombarded with links. So this most visited button is just cool.

3. Smart bookmarks - Tagging, most visited and recently bookmarked are some cool features which stand out instantly. And sure they are very useful and I do use them often. Though this is most visited is a repetition, what I initially thought its probably those pages which are bookmarked. But as it turns out, its same as the most visited button. I would have loved if it was most visited only for bookmarks. Places is probably a good feature but as a user it hardly makes any difference to me.

4.New Downloads Panel - This is something which is useful. You actually have a search so that you can find if you have downloaded something. Seems like an awesome idea. But I have never used it yet. Another cool part of the download is that now we can resume across sessions of firefox. Unlike earlier when you could only resume while you were still running firefox. Useful, but I still prefer Down Them All over native download feature. 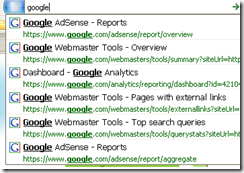 5. Smart Autocomplete - Why I call it smart is that instead of the earlier stupidity of searching just the url, it now also matches the Title of the page. Finally some good use of the TITLE tag from HTML. I was actually beginning to think that this tag is a total waste sort of a thing. But now we have some use of it. I am now so accustomed to it that I feel like being in Jurassic Age while using IE. A very impressive feature I would say. I would even call it one of the top killer features of Firefox3

6. The remember password dialog - Well technically you cant even call it a dialog anymore. Its been morphed into a slider. I dont remember how many times I have cursed myself over not remembering password to a site or not making firefox remember it. Next time when I go to the site I try a hundred different passwords and finally when I go though, I dont remember the password as I had clicked, that Not now for the Remember Password Modal Dialog. The slider is a great move and its really enhances the usability of the s/w to a large extent. A perfect use  case to when not to use a modal dialog

7. Malware/Phishing/ Forgery Alert - Well this is another improvement. Some people will never care to visit something like paypal.com.134.234.12.98/login  Well this new alert serves the purpose very well. Not on the top list but good none the less. Try it at http://www.mozilla.com/firefox/its-a-trap.html

8. Performance: Seems like an insane boost. Though I do feel that gmail is now faster but dont know who is to be held responsible for this insane nitro like boost. Seems like culprit is firefox according to John Resig

9. Make Extention Compatible - What I needed to do to make some of my fav extension to be compatible to firefox3 was just click on make compatible button. Though I would have loved if these guys had allowed that option while installing an addon too. To get around I had to unzip those .xpi files and then change the max version in install.rdf to current firefox version. Then zip the folder back and rename as .xpi. Now firefox was ready to install it. Most of my extensions worked this way except Google Gears, which I dont know when would be released for Firefox3.

10. The All new Address Bar design - Well the new address bar is definitely the most noticeable feature of Firefox3. It not only makes you more aware of the security and presents it in a much more appealing manner than the usual stupid dialog. But the best part of the address bar is the Bookmark and RSS icons. They make things so much easier to use. Although I would have loved all the features of Locationbar², but then its still an improvement and makes it the best.

Overall a cool experience and am sure it is leaving IE a long way behind and I am loving it. For MS or Apple to make me a convert from Firefox to them would be a task for sure.